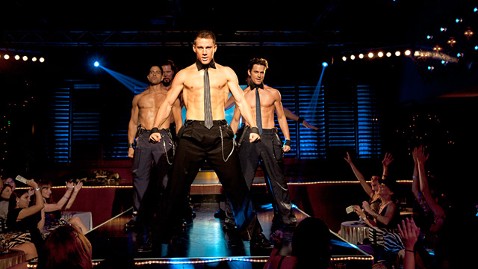 â€œMagic Mikeâ€ isnâ€™t what you think it is, if youâ€™ve seen the previews. Itâ€™s not a hilarious romp about male strippers. Itâ€™s a Steven Soderbergh movie, meaning itâ€™s not going to be hilarious. Funny and smart, yes, but not hilarious.

Loosely based on his real-life experience as a male stripper, Channing Tatum stars as Mike, a roofer by day in Tampa, Fla., with a passion for making furniture, and the featured attraction by night in the all-male revue Xquisite.Â  While on a roofing job, Mike meets Alex Pettyferâ€™s Adam, a 19-year-old kid trying to find his place in the world. Guess whoâ€™s going to show it to him?Â  Just a few hours after running into Mike on the â€œstrip,â€ Adam is onstage with Xquisite, stripping down to his underwear and giving his first lap dance.

Adamâ€™s sister Brooke, played by Cody Horn, does not approve. She tries not to approve of Mike either, but his confidence, good looks and intelligence are just enough to keep her from completely ignoring him.Â  Overseeing it all is Matthew McConaughey as Dallas, the slick, fast-talking, money-hungry aging stripper-turned-club owner.

McConaughey has never been shy about taking off his shirt but showing his other, um, assets on screen isnâ€™t something heâ€™s accustomed to doing. I guess we shouldnâ€™t be surprised that he relishes those moments and embodies this particular character like weâ€™ve never before seen him do.

As Mike, Tatum proves to be more than just a handsome face with chiseled abs. His performance shows heâ€™s mastering the art of speaking without actually saying a word. In movies, sometimes silence is the most powerful form of communication.Â  In particular, the scenes between Tatum and Horn are the heart of â€œMagic Mike,â€ with Horn stoic and powerful, taking a character that might become cliche in lesser hands, and giving her a distinctive voice and arresting persona.

Soderberghâ€™s warm and somewhat colorful palate when shooting the dancing scenes is in sharp contrast to the muted, cold palate he uses for his exterior shots. Itâ€™s a fantastic choice, suggesting the Tampa daylight isnâ€™t as friendly and comforting a place for these dancers as the confines of their club, where theyâ€™re the center of the universe.Â  The sunlight wasnâ€™t even apparent until a particular scene toward Â the end of the movie when it was perfectly appropriate and, I suspect, artfully placed by Soderbergh.

No doubt, â€œMagic Mikeâ€ is going to attract anyone excited by the promise of seeing the likes of Tatum, Pettyfer, McConaughey, Joe Manganiello, Matt Bomer and Adam Rodriguez gyrate and flex their ridiculously sculpted bodies, but what will catch mainstream audiences off-guard is the movieâ€™s depth â€” and also its length. Soderbergh, while brilliant, has a tendency to be a little long-winded, and I suspect the average moviegoer will find this movie too long. Anyone more interested in the language of cinema will appreciate Soderberghâ€™s ability to offset â€œMagic Mikeâ€™sâ€ overt sexuality with his moody lighting and depth of field.Â  Along with Reid Carolinâ€™s even-handed script, they help â€œMagic Mikeâ€ feel more like a work of art than what it otherwise might have been â€” another soulless, gratuitous, sexually charged Hollywood comedy.

Four out of five stars.